The following Wednesday afternoon, March 15th, I was given Jeff's diagnosis. Faye and Terry were visiting that day -- certainly that too was a part of God's plan. Terry had hurt his hand very badly at work and was off on sick leave which allowed them to spend many hours with us in Ottawa. I feel I can never express to them how much it meant to have someone share those terribly lonely hours with me when Jerry had to be at work.

A few days prior to this, one of the doctors had told us there were three choices of diagnoses for Jeff. All three were extremely serious and as he was talking, Jerry had to run to the bathroom where he was sick to his stomach. Jeff commented, "Well, there must be something catching around here, Mommy did the same thing this morning!" Little did he know the great heaviness in our hearts at the thought of disease in the body of one we loved so much.

The doctor took me into a little room. He said that ordinarily he would not have given me Jeff's diagnosis without Jerry being present, but he felt I was a strong enough person to handle this by myself. Jeff's diagnosis was 'lymphosarcoma', a fast-moving type of cancer affecting the lymph gland system as well as causing tumors to form and grow at a very rapid rate. The 'mass' they had told us about in Jeff's chest was a huge tumor. As I turned to leave his office, he said, "Mrs. McMillan, I just want you to know both my wife and I are praying for you. My wife seems to have been given a real burden for Jeff and has been much in prayer for all of you." Once again, our Heavenly Father let us know He was still in control. How grateful I was, on that very difficult day, to know that even Jeff's physician at that time was a Christian doctor who, along with his medical knowledge, believed in the power of prayer. 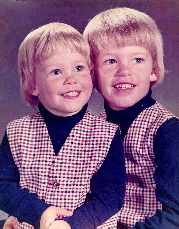 I left Faye and Terry to keep Jeff occupied for awhile so that I could regain my composure. I stood at a window at the end of the corridor on the fourth floor of Children's Hospital and quietly gazed out on a cloudy, dull March day. The doctor had been very honest. He did not feel there was much hope for Jeff but treatment was to be discussed with us the next day. I returned home with Faye and Terry that evening to hold my very dear husband in my arms and break the news to him as gently as I could. Jerry had been having a real struggle; it had been extremely difficult for him to keep his composure around Jeff, or even me for that matter. His family meant everything to him and this was all very, very hard on him. However, as soon as I saw his face that night, I could tell he had made his own peace with God and was now able to accept whatever might come our way.

As I mentioned previously, we had dedicated Jeff to God as a tiny baby, but we re-dedicated him that night and placed him in God's hands. We again thanked our Heavenly Father that He had seen fit to bless our marriage with children of our own. Our two boys had always been very special to us, but we had to realize they are not our possessions, rather they are a gift loaned to us from God.

We attended a Group Conference on Thursday, March 16th, with the staff of the Hematology-Oncology Clinic at the Ottawa Children's Hospital of Eastern Ontario. They informed us that Jeff's treatment would consist of chemotherapy as well as radiation. The object of chemotherapy is to kill fast-growing cells because cancer cells grow very rapidly. We were told if the treatment did not work, it would all be over very quickly for our son. We did the only thing we could do. We put our complete trust in God along with the treatment man had to offer our little one.

Thank God at this particular time for friends and family who prayed for us, sharing our tears, They really cared and kept on praying throughout many long months. Food was constantly brought to our home, and we received many babysitting offers for Jamie who was not yet in school. People sent an abundance of cards, gifts for Jeff, flowers and plants to brighten our days.

One really "blue day", there came a knock at my door about mid-afternoon. When I opened the door, Robin handed me a beautiful bouquet of carnations her mommy had purchased for me. What a lift -- what a blessing to know friends really care!

I also thank God for another very special person in my life -- my mom. She was always there to lend support, to comfort, and to help in whatever way she could. She was a real brick. It was not easy for her to go through the cancer routine with another beloved member of her family so soon after losing dad to this dreaded disease. Jerry's mother and father came to our assistance in another way by helping us purchase a second car which we would now be needing.

On Friday, March 17th, St. Patrick's Day, Jeff's chemotherapy began and he was given large dosages of very lethal drugs intravenously. He was a really brave little boy, He was very sick all that night from this first treatment. On Tuesday, March 21st , X-rays were again taken. While Jeff was in the X-ray Department downstairs, I was watching a talk show on television in his room called '100 Huntley Street'. At the bottom of the screen was a telephone number anyone could call, if they had a need to talk with a counselor. I called and requested prayer for my little boy. The lady who prayed with me over the telephone was so very kind. When I asked what her name was, she replied they weren't able to give out their names, but she told me her first name was Grace. From that moment on, that dear lady counselor became to me 'God's Grace'. She prayed that wherever Jeff was at that moment, God would touch his little body and take care of the entire situation.

Later that afternoon, the doctors requested to speak with me. One of the doctors drew a diagram explaining that a very large portion of the mass in Jeff's chest had entirely disappeared and only a small area of tumor remained. All this success, and only four days after treatment had begun. We were much encouraged and believed that the power of prayer along with medical treatment had begun the work.

Jeff was allowed to return home for a few days, but he was emotionally drained. We had a combined birthday party for Jamie and Daddy, as well as a 'welcome home' party for Jeff. There was a present all wrapped up for him and a big sign on his chair. I prepared his favorite food, but he was just too sick and discouraged to care. He had been through more in two weeks than he had in his entire lifetime. He talked in a really high pitched voice and whimpered constantly, like a tiny, hurt animal. All we could do was hold him tightly in our arms and tell him how very much we all loved him, and how special he was. We told him to always remember he was special to Jesus too.

It was a very difficult thing for Jeff to understand. The mommy and daddy he'd always been able to depend on for protection were now letting strangers do things to hurt him, and these people were also giving him drugs that made his tummy very sick, and leaving him with very little dignity. I think doctors and nurses should constantly remember that children are 'little people' and command as much respect as adults. We were very fortunate to have a super nurse in the Oncology Clinic. Oh, how Jeff loved her: She was so good to all the little ones and was a tower of strength to the parents as well.