At the end of February 1978, Jeff came down with a bad cold and cough. I doctored him myself for about a week, but he didn't seem to be getting any better, so on March 6th, I took him to be seen at the General Hospital Emergency Department. Our family physician was on vacation, so Jeff was examined by a doctor who was on call. He prescribed an antibiotic and cough syrup and sent him home.

The following evening after I had put both boys to bed, I heard a noise upstairs. I ran up and discovered Jeff was experiencing severe breathing problems. Jamie was very ill that night with flu, so Jerry took Jeff back to be seen at the hospital. The doctor on call immediately admitted him when he saw how sick Jeff really was. He was given an intravenous, placed in an oxygen tent to aid his breathing, and moved into the Intensive Care Unit. When Jerry called me at home I could tell he was quite upset as he shared with me what had taken place. When the doctor was inserting the I.V. needle, Jeff had looked up at him and said, "Well sir, this certainly is a new experience for me; I never had anything like this done to me before." Later the doctors told us that at that particular time, Jeff's breathing passage was only about the size of a match stick..

X-rays were taken over the next two days, and then the doctor asked to speak with us on a Thursday morning. We sensed that what he had to tell us was serious, and went to keep our appointment with great fear and trembling. He told us at that meeting that a 'huge mass' had been discovered in Jeff's chest and they were transferring him to the Children's Hospital of Eastern Ontario in Ottawa that same day. We asked to be allowed to take him out ourselves, and it is a trip neither one of us will ever forget. Jeff fell asleep between us on the front seat, his head in my lap. His daddy was crying softly as he drove. I sat there, woodenly, with my arms around my darling son, the most precious possession in all the world.

However, even at that very difficult time, I felt a peace I could not understand. I knew many people in Brockville who had already heard of our situation were on their knees asking Christ to sustain us.

We were met in Admitting by the chief pediatrician who was very kind and gracious. He told us we could stay right with Jeff, day and night. There were lounge chairs in the children's rooms that made into single beds, and we would be allowed to stay overnight whenever we wished to do so. What music that was to my ears! Our pastor, his wife, and son came to Ottawa that evening, and spent time visiting with us and in prayer. This meant so very much.

During the following week many tests were done, including X-rays, bone marrow tests, lumbar punctures, and a biopsy, as well as many, many blood tests. All of these procedures were very painful and frustrating for Jeff. It also cut his mommy and daddy to the core to have to watch these happenings.

Friday, March 10th, the day after Jeff's admission to the Ottawa hospital, was Jerry's birthday. We had planned a big party, as usual, but not much celebrating was to be done this year. 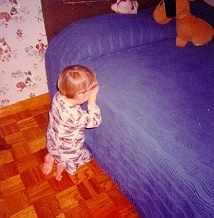 On the Saturday morning, Jeff and I were alone in Ottawa as I had felt it was better for Jerry to return home and go to work. On that day, Jeff became very interested in talking about God and His love, and he gave his heart to the Lord in a very real and wonderful way. A large group of doctors were later gathered around his bed, and I'll never forget what he said to them. His little face was all wet with perspiration from all their probing and prodding, and with big blue eyes just shining, he said, "Sirs, it doesn't matter what is in my chest, because Jesus is there, and everything is going to be all right". From that day on, whenever we came across rough times, and there were to be many, those words kept ringing in my ears. I later heard one of the young doctors say, "I don't know what that little boy has, but it's going to see him through this. He's a fighter."

Another beautiful experience happened to me on that same weekend. I knew very few people in the city of Ottawa and Jeff and I were completely on our own. I simply bowed my head and told Christ He was our only hope, and He was my best friend. After going to bed in my little uncomfortable cot in Jeff's room, I literally felt arms around me, and spent a good portion of that night discovering how very real our Savior can be. Those dark, dark days as I look back, were some of the most precious days in my experience as a child of God. I had to discover that we have to depend wholly on Christ; nothing and no one else will work. I remember expressing to Jerry about this time, "Honey, I don't think things will ever be the same for us again". How true that statement was!

The first week of Jeff's hospitalization, he would cry and cry after the technicians would take a blood sample from him. One day I asked him why he cried so much. Was it because the needle hurt or was he worried about something else? He replied, "Mommy, they're taking all my blood. I won't have any left". I quickly reassured him that one of God's miracles was that as soon as they took blood from his finger or arm, immediately his body produced more, and he still had lots of blood left. After that little talk, he seldom made any fuss from having his blood work done. It is so important to question our little ones about what is bothering them. We never know how they are interpreting something and it becomes very frightening to them. Throughout Jeff's treatment, I tried to make it a rule to always try and find out what was worrying him, or what he was thinking about.