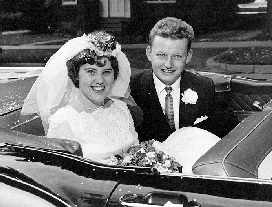 September 7th, 1963 dawned sunny and clear. What a lovely day for two young people to exchange their wedding vows. How grateful we were that we had both been raised in Christian homes and had committed our lives to Christ at a young age. Jerry was twenty-two years old and I had just celebrated my twenty-first birthday.

We returned home from our honeymoon in Atlantic City, N.J. and settled into the routine of married life. Both of us held down a full-time job and were active in our church as well. It was a busy but very happy life. Ten months after we were married, we purchased our first home, a little two bedroom bungalow. Friends came over to help us paint and decorate, and when we had that little house all fixed up, it really did look like the proverbial 'honeymoon cottage' -- all we lacked was the white picket fence!

From the time of our marriage, I had been employed at the Psychiatric Hospital as a stenographer. I really enjoyed my work. Both Jerry and I had often commented on the fact that life had been very kind to both of us. We had our love for each other and together we shared our love for Christ. We lived in a very beautiful part of Ontario. Brockville is located along the lovely St. Lawrence River in the heart of the Thousand Islands.

We had many friends and life was great. The only unhappiness we experienced in those first years of married life was the fact that after five years together, there was still no sign of having a child of our own. This was something we both wanted very much! In March of 1968, I was admitted to hospital for tests and minor surgery to determine whether I was physically able to conceive and carry a child. Everything seemed to be fine and I was sent home and told 'to relax'.

I continued to work at the hospital, where a part of my job was to work with the psychologists who were testing children. Each time a blonde blue-eyed youngster came to the clinic for testing, I would feel a little pang inside and pray that God would one day see fit to bless our home in this way. Even as a tiny girl, when someone would ask what I wanted to be when I grew up, the answer was always the same -- "just a mother!" I played with dolls until I was a teenager, and then put them away only because I was embarrassed to be seen doing so at my age.

In the summer of 1969, I quit my job to see if staying home was the answer. During this year, my husband began quietly talking about the possibility of adopting a baby. I wasn't too sure about the idea as I wanted very much to have a baby of our own. However, we prayed about it and in January of 1970, we attended a group meeting at our local Family and Children's Services. During the interviews and a home study which followed, a close friendship was established with our social worker. We were delighted to discover that she too was a Christian. In February, Jerry and I decided to spend a short vacation in Florida with my parents. On our return home, we anxiously awaited news about whether or not we were going to be accepted as adoptive parents. We felt good about the situation -- surely God was in control. We had prayed earnestly about this. Hadn't He sent us a Christian social worker? Was this too not a part of His plan for our lives?

In April of 1970, we received a telephone call from our social worker on a Monday at noon hour. She informed us that we had been accepted by the agency and would soon be getting our baby daughter. We were told to purchase articles we would be needing. The first item I wanted to buy was the most beautiful baby carriage we could find.

We were so excited by this news. However, I was also experiencing other strange sensations and had a feeling that perhaps something else might be happening to us. An appointment to see my family physician was arranged. The following day he telephoned the news to us that we were expecting our own child. The poor man -- I even accused him of getting my test results mixed up with someone else's. He laughed and assured me that the medical profession was a little more reliable than that. He said the most beautiful words I had ever heard, "Joan, you really are going to be a mommy. Your baby is due in December."

Can anyone imagine the joy we felt -- our own baby after all the waiting and hoping. We wished we could take our baby girl as well as she had already begun to seem a part of us even though we'd never even seen her. It was as though God gently pushed the door shut on our plans, and I found that rather difficult to understand because we had felt so strongly that He had been in control of this area of our lives. However, we both knew that God knew best what direction our lives should take.

That Tuesday evening is still very vivid in my mind. This was the same day the doctor had given us our incredible news. A knock came to our door and when I answered it, there stood our social worker friend. She came for a chat and a cup of coffee. We had already purchased a baby carriage and it was in the room that was to become the nursery. I grabbed her by the hand and took her into the room. Grinning at her I said, "Guess what?" Well, I guess what I was feeling was written all over my face because she replied, "Joan, you're going to put your own little one in that carriage, aren't you?" She took me in her arms and cried tears of joy right along with me. Together we marveled at the goodness of God.

So many of our church friends had prayed with us for this miracle. Never had there been a baby who was wanted more than this one.