We were very grateful that although late winter in Ontario is so unpredictable, we awoke to bright, sunny, clear skies almost every day we had to make the trip to Ottawa. How wonderful that as a family, we could bow our heads together right in our car and ask for our Heavenly Father's protection for that day.

In April Jeff was again hospitalized for two weeks of chemotherapy plus he was to have ten radiation treatments. He was admitted to the Children's Hospital and then driven to the Ottawa Civic Hospital each day in the hospital van to receive the radiation. He was a little disturbed when the doctors had to draw diagrams in green ink on his chest and neck to show where to treat him. That also meant he could not get his chest or neck area wet, even when in his bath. He would also have to be protected from the sun for many months to come.

At this point in time, Jeff's veins were so used up, the staff had tremendous difficulty in getting the I.V. started. They decided to start an intravenous through which they would administer the drug for chemotherapy one day, then early the following morning they would once again administer this medication. Then they would remove the needle and take him for his radiation treatment. That meant that every other night he could sleep without the I.V. Although I felt having the radiation might frighten him, he got really excited when he saw all the equipment. Jeff was the type of boy who asked many questions, and in fact, he could name many of the drugs I found difficult even to pronounce. When his radiation treatments were finished, the nurses at the Civic told me they were really going to miss his visits. They said he always gave them all a good laugh or two.

I'll never be able to forget the look on Jeff's dear little face when the nurse would roll the I.V. pole and leave it beside his bed. He knew what had to happen over and over again. I would try and make a little game of it when things got really rough for him. I would buy a little toy and wrap it in gaily colored paper, and tell him if he'd try to hold really still for the technician, mommy had something very special for her 'special boy'. Many times it took five or six attempts before the needle would finally be inserted into the vein. It was so hard to hold my own child down in the bed to try to aid the staff in their miserable tasks. After a few months, I got to the place where it was almost impossible for me to do this because of the hurt look on Jeff's face, as if I were betraying him or something.

Jeff was really very good about getting the needles, but after two or three attempts, he would sometimes become very frustrated and start to scream. Then I would have to leave the room and tell him I'd return when things settled down. Many, many times I walked up and down outside his room, actually feeling the pain he was also going through. I'd have given anything if they could have done it to me instead of him. I couldn't really blame him for crying because I knew how much it must hurt. 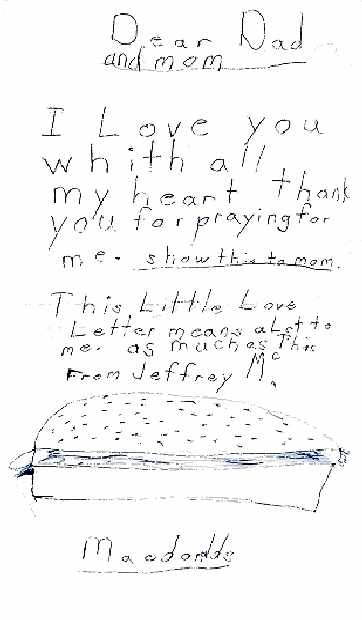 Jeff often wrote us little notes when we'd be away from him for a little while. One day, when we returned from lunch, he handed us a note he'd written on one of the yellow menus. He'd written:

I love you more than

anything in the hole

world and thank you

for praying for me.

When I turned the card over, he had printed 'Out of Order', which meant his I.V. had been started and now it was difficult for him to write any more.

Often, his little arm would become very swollen and that meant fluid had leaked into the tissues rather than into the bloodstream. The I.V. had infiltrated. When a vein becomes brittle it may leak, or sometimes the needle would touch the wall of the vein or even penetrate it. This meant the needle had to pulled out and be re-inserted. I honestly think this was the hardest part of the whole ordeal for Jeff -- those terrible I.V. needles that wouldn't go in: He was constantly watching his arm for swelling and would check the drip to make sure the I.V. was working properly. He'd ask us over and over if it looked O.K. to us.

Following this two week treatment schedule, we still had to commute to Ottawa daily for treatment and constant blood checks. They watched his blood count closely because chemotherapy causes the white cell count to drop, and it if becomes too low, it meant Jeff was very much more susceptible to infection.

When we attended Children's Hospital on an out-patient basis, we followed a pattern. Firstly, we went to the front desk for forms we had to sign giving the doctors permission to give Jeff the treatment. It made me very uneasy each time I signed one of these forms. I never did know if I was doing the right thing for my son, but both Jerry and I felt we must follow the medical staff's advice.

The next step in the procedure was to take him upstairs to the Blood Clinic where they would prick his finger and suck through four different straw-type tubes until they had a sufficient amount of blood for testing. Jeff hated to have his blood taken this way. He said it hurt far more than to have it taken from his arm, but beg as he would, they had to use his fingers because his veins had to be saved for the treatments. Then we would have a long wait while the results were tabulated and then phoned down to the Oncology Clinic. Next on the agenda was weighing Jeff and even his height was checked. If his blood count was high enough that day, the next part of our 'visit' was to help hold him for his chemotherapy.

He was so good most days. He'd sit up on the table and say to the nurse, "Pat, don't you think this looks like a good vein to try today?" One day she looked at me with tears in her eyes and said, "You know, Joan, this wouldn't be so hard on all of us if he wasn't so good!" All of these procedures plus the three hours traveling time became very tiring for all of us, particularly Jeff. This schedule continued for many weeks; sometimes we went to Ottawa five or six times a week. Eventually Jeff's treatment would follow a cycle which would have to be repeated over and over, but the initial treatment had to be strictly adhered to and was extremely intense.

One day when we made our daily visit to the Clinic, Jeff's special nurse was waiting for him. She said, "Hey there fella, how would you like a chance to take my blood today?" I could not believe my ears! She had all the equipment spread out on a tray ready for him. He thought it was a great idea! Well, at this point in time, my mom made a beeline for the nearest exit. I felt much the same way as she did, but must admit my curiosity got the best of me. It was amazing to watch this beautiful lady sit there and tell Jeff to "go ahead" with the procedure which included sucking a total of three tubes of blood from her finger. What do you think Jeff did? With an enormous grin on his face, poking over and over at her finger, he was singing, "Suck your blood, suck your blood!" When I expressed my amazement at her dedication going far beyond the call of duty, she simply answered me by saying, "Joan, he really needed to do that. After all, he has to sit there and let us do it to him over and over again. He's earned it." That particular nurse is one person I will remember with great affection the rest of my life.

If I am going to be truly honest about my feelings at that time, I must confess I found it extremely frightening to see the change that had taken place in my son. A year earlier Jeff would not have deliberately hurt someone that way. Where had my sensitive little son gone -- the boy who couldn't stand to see even an animal hurt? I wondered if going through the anguish of the treatments was going to permanently affect Jeff's personality. I did not want him to change -- I liked him the way he was and already I could see so very many changes. We had tried so hard to raise our boys to be good and obedient, and it seemed that within a few short months, all that we had worked so hard to accomplish, was being destroyed, and there was nothing we could do about it.