Every Christmas Jeff would comment, "Mommy, Jesus and me - our names both start with a J and our birthday's at the same time". I wished I could say to him this year, "Yes honey, and this year you and Jesus can celebrate your birthdays together, but, oh sweetheart, we sure are going to miss you at our house!" No one had enjoyed special occasions more than Jeff, especially Christmas. He was always the one who got the rest of us excited. 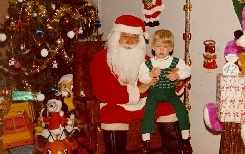 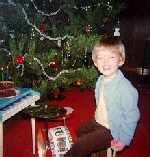 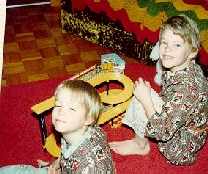 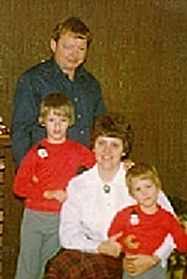 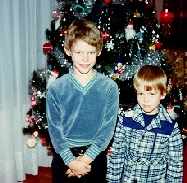 The first Christmas after Jeff died was very hard on Jamie. He would sit watching special little Christmas cartoons on T V. and would suddenly just burst into tears. He didn't know himself why this happened. In all of his life, he had never even had to watch television alone. Jeff had often sat in the big brown recliner chair with his arms cuddled around Jamie, or sometimes he sat on the carpet and Jamie would lay his head in Jeff's lap. Now here sat Jamie, all by himself in the family room, and he was desperately missing his brother. We tried to be with him as much as possible, or let him share these times with a friend.

About this time I took Jamie to our family doctor because of a throat infection, and while there, asked his advice as to how we should handle this. He replied, "Joan, Jamie has to work out his grief in his own way. All you can do is be there when he needs you and love him a lot". Well, that was exactly what we'd been doing, along with asking God to help him and to give us wisdom daily in dealing with him.

December 17th arrived - the day Jeff would have been celebrating his ninth birthday. Once again I discovered how faithful God is. The Flower Shop truck drove up our driveway and once again our friends expressed their love and concern in a tangible way. The delivery man smiled at me, "This must be a special day at your house". I thanked him, and as I was arranging the flowers in a vase I thought, "Yes sir, this is indeed a special day". On my refrigerator is taped the verse, "This is the day that the Lord hath made. We will rejoice and be glad in it". December 17th , 1979 was indeed another day that the Lord had made, and I intended to try and rejoice in it. Phone calls were also plentiful that day - even from thousands of miles away. Once again, I felt uplifted from other's prayers on my behalf. 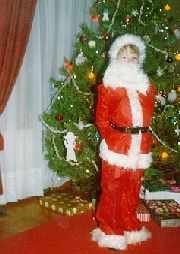 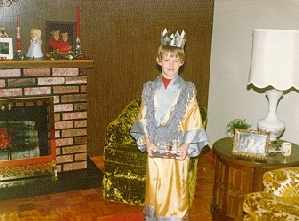 Jerry found the Sunday School Christmas Program one of the hardest things he had to deal with so far, because he said as he sat there, all he could see was Jeff's little face as he had looked the year before. Jeff loved to participate in concerts and be on stage, whether it was being Santa in the school concert or one of the three kings in the Sunday School program.

Also, that evening, his little cousin was wearing a pair of Jeff's shoes we had given him, and that caught Jerry's eye. I was quite involved musically with the concert and I guess that got me through without too much trouble. However, the following week I attended the Public School Concert and found this extremely difficult to handle and better understood then how Jerry had felt. Jeff was always exuberant at functions such as these, and it hurt to realize he would never take part in another one. I still find going to anything at Toniata School very difficult and hope some day this feeling will go away.

We had a house full of people for Christmas evening and it was very enjoyable. I must admit, when I had a few moments to myself in early afternoon, I allowed myself the luxury of a good cry. Jamie had a really happy day and that was all either Jerry or I asked for this year.

I'm so glad I serve a loving Heavenly Father who didn't just let something very difficult take place in my life without preparing me in such a beautiful way. Also, after losing Jeff, there were so many times, people were sent my way to uplift and encourage. We had a ladies banquet at our church and there was a lovely Christian mother who shared with us her story. This dear lady was suffering from cancer, and she shared her testimony with us in a sweet way, telling us she was very much at peace and had placed her life as well as that of her family in the Father's hands. She also shared a scene with us she had experienced following the death of her infant son. Jesus Christ Himself had appeared to her and as she looked at Him, worshipping Him, she felt so drawn to the being. She said she could not express the feeling of love that radiated between them. As she continued to gaze at Christ's face, a little child had come and stood at Jesus' side. She said although there was no way she could take her eyes off the Savior's face, she knew, without a doubt, the child was her own son. She again felt a tremendous surge of love go from Christ to the child as He placed His arm around the little one, and she knew then the great love and care her child was receiving.

I felt sobs welling up from way down deep inside, and in my mind, I pictured a little, blonde, blue-eyed Jeffrey standing in that very spot beside Jesus. It makes me so happy to realize there will be children in heaven. God had, once again, sent just the right person to minister to my particular need. Oh, the joy and peace that flooded my soul again that night:

A friend delivered a beautiful plaque to our home a few weeks after we had lost Jeff. There is a picture of Jesus in the lefthand corner, a cross in the middle, and a picture of a smiling Jeff on the right hand side. Underneath the pictures is a lovely poem which our friend had engraved for us. It read as follows:

God had a place in Heaven,

A beautiful spot to fill.

So He searched the whole world over,

For two that were in His will.

God took some looks from mommy,

And a few more from dad.

Then He moulded them together,

And made Himself a lad.

Jeff was so sweet and very smart,

He knew that Jesus was in his heart.

Mom and dad - the family shared,

The little boy with the curly hair.

Yes, God even let them name him,

And keep him for a while.

Yes, He certainly had a purpose,

For sharing that sweet smile.

The scripture engraved at the bottom of the plaque is from Psalm 119:89, "Forever, O Lord, Thy Word is settled in Heaven".