We had been asked to return to the Children's Hospital in Ottawa the following day, Wednesday, May 23rd, as the staff at the Oncology Clinic wished to meet with us. They had Jeff's autopsy results, at least some of them, and also there were more papers to be signed concerning insurance matters. Once again we had the tremendous opportunity to share our faith with them. We had often expressed our feelings to the medical staff concerning the fact that as much as we respected their training and knowledge regarding medical matters, we had continually asked God to give them wisdom in making treatment decisions, etc., not only where our own boy had been concerned, but the other children as well.

The weeks following Jeff's funeral were very busy ones indeed. You don't stop sharing Christ's blessings after something like this happens in your life. It seemed rather to become a full-time job, ministering however we could to so many people, all of whom had different needs. We had assured other families that our door was always open, and if there was any small way we could ever be of help, we wanted to be available. I felt a compassion for others that I had not experienced prior to Jeff's illness. Sure, I had felt sorry for other people when they had problems, but I had not known what it was like to actually hurt for others as I held them up in prayer.

Our pastor had taken his text for Jeff's funeral from II Samuel, Chapter 12, Verses 15 to 23, concerning a time when King David's son had died. We too had prayed and fasted for our son's healing, but God had chosen to take him Home with Him. David had realized, as did we, that life does go on, and so we tried to greet each new day with joy in our hearts, and to make life for Jamie as normal as we possibly could under such circumstances. 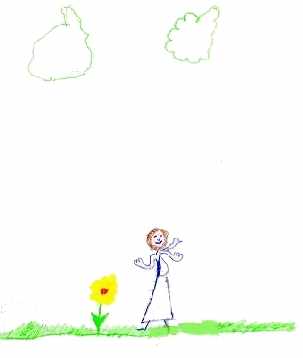 A couple of weeks after Jeff died, there arrived in the mail two things addressed to him personally. The first envelope contained his National Geographic Magazine and the second was his bike license. I could still remember the look of happiness on his face when, just a few weeks earlier, he and his daddy had loaded that new bike into the back of the car and had taken it to the police station to sign up for his license. It seemed like such a long, long time since I'd seen him, and it was a time to weep. I was beginning to feel very lonely for my little guy!

The teacher sent Jeff's school work home and in one of his textbooks, I discovered where he had drawn a picture of Jesus standing with a perfect little dove perched on His shoulder. I thought of how much Jeff had wanted to be baptized ln water and realized that, even at school, he had been thinking about it. I know the Lord knew the desires of that little child's heart. Jeff had died one week before the service in which he was to have been baptized. Instead of standing beside his beloved pastor in the baptismal tank, he was, at that very moment in the arms of Christ. How beautiful!

Jeff's school teacher told us that many times when she would be reading a Bible story to the class and had trouble pronouncing a word, a little hand would go up and often Jeff had the correct answer for her. He also spent some time at school drawing similar pictures to the ones included in this book. In fact, more than one of his teachers have commented to me about this. It was very difficult for the other children in his Grade 3 class to accept the fact that Jeff would never be back and they asked the teacher if she would please just leave his desk as it was for awhile. She agreed to do this. Some of the children got together and made a huge card for us. On it was a picture of Jeff wearing his T-shirt with his name on it. When he'd first taken sick, often he would insist on wearing that particular shirt to the hospital because so many different doctors would keep asking him to repeat his name. He said it saved him a lot of trouble. Many, many times since Jeff has gone to be with Jesus, I have taken that shirt out of the drawer and hugged it to me as I wept. 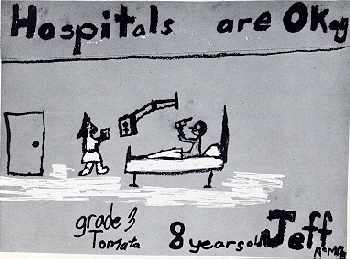 A teacher from our church congregation asked me one evening if I had seen the poster Jeff had drawn that had been on display in the Brockville Public Library. I hadn't even heard about any such poster. She brought me a copy of a hospital newsletter and I discovered Jeff's poster had been chosen to be included in their booklet. It was a picture of a little boy sitting in bed with a toy gun and a nurse standing by the bed. I couldn't help but notice there was no I.V. included in the picture. At the top of the page, Jeff had printed 'Hospitals Are Okay'.

About one month after Jeff's death, we were attending our midweek Bible Study and Family Night, and I must admit, loneliness had set in. I very much missed all the delightful hours Jeff and I had spent together and particularly missed the happy times we had spent at the church when he would play the organ and I'd join in and play along on the piano. All that day, I could not get the thought to leave my mind that perhaps it really had been time wasted that I had spent teaching my son school lessons and music along with all the other things in life children must be taught In fact, I made mention of my feelings to a teacher who was also at the meeting. She reassured me that it definitely was not time wasted. I was very restless all through the Bible Study that night and spent a sleepless night. There were many questions I wanted God to answer.

A little girl in my Sunday School class had said to me the previous Sunday morning, "Well, Mrs. McMillan, I guess maybe Jesus needed Jeff more than we did". Someone else had written in a sympathy card, "I guess Jeff must have been a very special boy for Jesus to take him so soon". However, I still had this gnawing feeling about hours that perhaps had been time wasted with Jeff, when there were more important things I should have been teaching him. The following morning, when I opened the mail, this beautiful poem fell from the envelope.

I will lend you, for a little time,

A child of mine, He said.

For you to love the while he lives,

And mourn for when he's dead.

It may be six or seven years,

Or twenty-two or three.

But will you, till I call him back,

Take care of him for Me?

He'll bring his charms to gladden you,

And should his stay be brief.

You'll have his lovely memories,

As solace for your grief.

I cannot promise he will stay,

Since all from earth return.

But there are lessons taught down there,

I want this child to learn.

I've looked the wide world over,

In search for teachers true.

And from the throngs that crowd life's lanes,

I have selected you.

Now will you give him all your love,

Nor think the labour vain.

Nor hate me when I come

To take him home again?

I fancied that I heard them say,

'Dear Lord, Thy will be done!'

For all the joys Thy child shall bring,

The risk of grief we'll run.

We'll shelter him with tenderness,

We'll love him while we may,

And for the happiness we've known,

But should the angels call for him,

Much sooner than we've planned.

And try to understand.

This poem had been sent to us by the mother I mentioned previously who had also lost her son in the canoeing accident at a very young age. Once again, I marveled at how God had answered my prayer before I had even asked. That poem was already in the mail when I had verbalized my feelings concerning the content of the poem the previous evening. God was so good and His timing once again was just perfect.