Jeff had become very interested in communion shortly after he had become ill. He would ask us repeatedly if he could be allowed to partake of the emblems during the communion services. We felt he was rather young, but after questioning him regarding his knowledge on the subject, we agreed he could participate. After his first communion, he came to me as soon as we arrived home from church, put his arms around my waist and said, "Mommy, that was so special to me!" He always looked forward to communion the first Sunday of each month.

During communion service one Sunday, I noticed he was checking his arms all over and even had his pant legs pulled up checking his legs. When I asked him what on earth he was doing, he whispered, "I'm doing what the pastor read about in the Bible, I'm examining myself". The pastor had read the scripture that is shared often on Communion Sunday found in 1 Corinthians 11:28 - "But let a man examine himself, and so let him eat of that bread, and drink of that cup". Well, Jeff was examining himself, and the only way he knew how was the way the doctors examined him every week. At first I found this very comical, but after some reflection, I realized how very serious Jeff was in trying to do exactly what God wanted him to.

Often, I recall a communion service that was very special to me. It took place during one of the times Jeff was in hospital in Ottawa and he had insisted his mommy and daddy return home and sleep in their own beds for a night. He had convinced us he'd been fine by himself for a little while. We awoke early on Sunday morning and planned an early trip to Ottawa. I prepared communion sacraments for Mom, Jerry, and myself, and as we joined together in front of the television set, we shared the emblems as we watched a gospel program on television. It was such a blessed, sacred time. We all felt God's presence very near all that day in a special way. When we arrived at the hospital later that morning, Jeff was engrossed in a religious program on his television set, and he said, "Hey, did I ever enjoy the gospel programs this morning!" We were so thrilled to think he would choose this type of program all on his own, when he was free to select a children's program or cartoon instead.

In April of 1979, we had a special speaker at our ladies missions banquet. This dear Christian mother had lost her son the previous June in a tragic canoeing accident in northern Ontario. Many young boys lost their lives in that accident as it was a trip organized by their school. I so much enjoyed the message she shared with us. The following morning, we had a ladies' prayer gathering, and I happened to arrive a bit early to help get the coffee ready. This mother had come early as well, and we began to share our experiences with each other. Again, I felt God's preparation for what was to come. I must add that there was still a real inner peace in my life, almost a joy in experiencing personally how we can take our burden, no matter how great or small, to the Lord and leave it with Him.

One day, when I was dusting Jamie's dresser, I came across a book mark with the scripture that is found in John 3:16 - "For God so loved the world that He gave His only Son, that whosoever should believe on Him, should have everlasting life". Now I had been aware of that verse since I'd been a tiny child, as most people are. However, the impact of it hit me as I stood repeating it over and over. God knew how much His only son must suffer. I had two sons, and the thought of losing just one of them hurt more deeply than words could ever describe. I was able to understand more fully than ever before the supreme sacrifice our Heavenly Father made, when He willingly gave His only son, that I, and anyone else, might have everlasting life.

We enjoyed some great family times together those next few weeks. We spent long hours taking drives and going on short hikes, just simply enjoying God's great outdoors Some days it was hard to believe what the doctors had told us, Jeff seemed so well. He was still on some medication, but not a lot. He was a really good boy about taking his pills faithfully -- some of them were really huge for a little guy to swallow, but he did his best to get them down. Sometimes, when they came back up, we had to start all over again and his tears would flow and we'd coax him to "please honey, just try one more time".

Grandpa McMillan had given Jeff some money towards the new bike he'd been saving his pennies for. He came home with a shiny new red bike and his eyes sparkled as much as the paint on the bike. He was so excited! Daddy got him a new lock and key, and from then on, that key was on a chain around his neck wherever he went, except in his bath. He and Jamie put their pennies together and bought a little hamster from a friend. Our latest family arrival's name was 'Shiney' and he became very important to the boys. I must admit it took their mommy a lot longer to find him so special. How good it made all of us feel to see Jeff so very, very happy. It seemed he almost always had a big smile on his face and his hugs and kisses were plentiful. 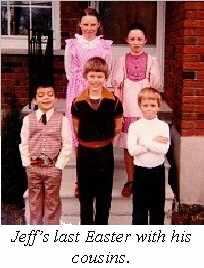 We had monthly water baptismal services in our assembly and Jeff had been expressing a great desire to be baptized After our April baptismal service, he approached the pastor all on his own and asked if he was old enough to be baptized in water. The pastor agreed, and gave Jeff the form to fill out and return to him. I can still see his little head bowed over those papers at the kitchen table, filling in the information that was required. He kept telling me he "just couldn't wait" and would even come home from school thinking about the testimony he wanted to share. One afternoon after school, he was sitting in the big recliner in the family room and he said, "I've been thinking all day about what I plan to say to the people, Mommy". I said, "Oh, you have?" A few moments later he grinned at me as he teased, "Curious, aren't you?" I laughed and admitted I most certainly was, and he said, "Well, you'll just have to wait 'cause I have so many things to say".

Jeff's appetite continued to be really good. He very much enjoyed his church activities and sang his little heart out in the Junior Choir. On Easter Sunday morning the children sang a little song about miracles and the words expressed how God knew their names and He cared about them. Tears filled my eyes as I sat at the piano accompanying them, because as I watched my son's face as he sang, I knew he meant every word. He'd been singing and singing the song at home and it was precious to realize that he, too, had a song in his heart. We spent time together with Jerry's family that Easter weekend and the boys had a great time with their cousins.

One of the things I enjoy most in life is my work with children. I teach Sunday School, am active in our Activity Club for children aged 6 to 13 years, and assist with the Junior Choir. It is so very important for children to take an active part in God's work. I believe many hearts have been touched by children's ministry in word and song.

Our pastor set up a calendar for prayer and fasting at the church. One Sunday morning in April, he presented to the church congregation the many needs in our assembly and at the top of the list was Jeff's name. He requested that the people who wished to take part come forward and I was thrilled at the response. It seemed almost the entire congregation went to the front of the church to sign the list, many of whom took numerous time slots for prayer during the day and night. Jeff was so pleased. He sat quietly watching, then looked up at me and whispered, "Do all these people love me that much?" After the service, he ran up to our pastor as he was shaking people's hands in the vestibule, and gave him a big hug. He talked all that day about how much he loved Pastor Ettinger.

How I thank God for the way in which people shared our burden so willingly. It seemed that as they prayed, their love for one another grew as well as their love for our family. There was a beautiful bond of love in our church that I had never felt so strongly before.