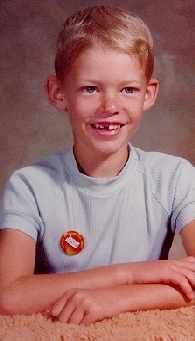 About the same time Jeff lost his hair, his baby teeth also started to come out. He'd grin his little toothless smile and say, "Wow, it's bad enough when a kid loses his teeth, but when your hair falls out at the same time, you're really in big trouble!" Then he'd laugh and run outside to play. I found little events that are special times for any mother became very emotional for me. For instance, the night Jeff lost his first baby tooth, I was getting the 'Tooth Fairy's' money ready to put under his pillow, and I simply stood with that little tooth in my hand and cried and cried. He seemed so little to have to face so much.

Jerry's theme song during the long months became the words of a gospel chorus:

I'm Learning to Lean on Jesus,

I'm Learning to Lean on Jesus'.

In fact, he had a red button with these words on it fastened to the sun visor in the car. We also found our gospel tapes to be a great comfort as we enjoyed them during our many long hours traveling to and from Ottawa. 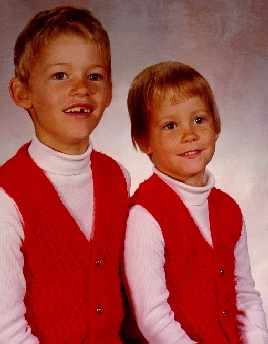 By late fall, Jeff's hair had grown back in and it was blonde and he had beautiful curls. He wasn't so sure he liked having curls, but his mommy sure did. I must admit I was just happy and thankful he had hair at all!

About this time, we could see Jeff was needing to be disciplined. It had been difficult not to spoil him, but we felt the time had come when we had to consistently crack down on him. We had always been fairly strict with the boys, but at the same time, always let them know how much we loved them and explained why we had to discipline them. We tried at first depriving him of things he liked most, for instance, his bike. Unfortunately this tactic didn't work and we hated the thought of physical punishment because of the mental and physical torture his treatments caused. However, one night after supper Jeff really was making everyone very miserable with his misbehaving. What was needed was a good old-fashioned spanking. As much as we dreaded the thought of it, Jerry felt the time had come for action. He took Jeff up to his bedroom and sat down and had a long talk with him. I have never once seen my husband strap one of our children in anger. He always discusses the problem with them thoroughly and then doles out the punishment as he sees fit. After he spanks them, he always has a word of prayer with them. Believe me, I don't think they ever feel much like praying about then. When Jeff's punishment was over, he was left in his room to think about how he'd been behaving.

Later that same evening, I heard sounds coming from the living room, and when I looked in, there sat Jerry with Jeff on his lap, and it was his daddy, not Jeff, who was sobbing. He told me later it was the most difficult thing he'd ever had to do in his life.

In December we had our usual Christmas birthday party for our 'Christmas Boy'. He was allowed to choose the friends he wanted and pick out the menu. So it turned out to be a pizza party with a big cake shaped like an eight with Santa and his reindeer at the North Pole right in the center. He was so excited and had such a good time. He came to me a few days later as we were looking at slides of his party, and he said, "Mommy, thanks for the terrific party. You won't need to have one for me next year." I felt like someone had kicked me in the pit of my stomach. However, as I look back, it seems as though God, through Jeff himself, had begun to prepare me for what was to come.

Around the same time as Jeff's party, we were having a family dinner out in a restaurant. The Christmas tree lights were twinkling gaily and there was that special feeling in the air. Jerry and I looked at each other and decided it was the right moment to share our little secret with the boys. Jerry told them he had something very special to share with them, and they became quiet. Then Jerry announced that if all went well, mommy was expecting a new baby that was to arrive the next summer. Jeff took my hand between his own and pressed both our hands together on his cheek and said excitedly, "There sure isn't any present I'd rather have than that". Then he proceeded to tell us he thought Nicholas was a nice name. We had all decided the baby would be another boy because that was what God always gave to the 'McMillans'. Jamie wasn't so sure it was a good idea at all. Finally, we got out of him the fact that he thought we might not want him any more because we'd need his room for the new baby. When we reassured him that we certainly didn't intend to replace him -- he was much too special for that!-- he came around to the idea and decided maybe it would be nice to have another brother. Little Jamie has been such a blessing to us through all the hard times. I don't know what we'd have done without him. I continually thank God for Jamie and his sunny, warm little ways.

We left the restaurant and went across the street to a shopping mall. The boys went to talk with Santa. I noticed Santa having a good chuckle, and when the boys returned, I asked Jeff what was so funny. He said, "Oh, I just asked Santa, guess who's pregnant? MY MOM!". I think perhaps my face turned a fast shade of red because Santa waved and laughed. Our son had a greater command of the English language than we had realized.

However, our new baby was not meant to be. A couple of days before Christmas I was hospitalized and lost our 'little Nicholas'. We were so sad. Why was God shutting another door?

I must admit I was beginning to feel a little like Job. I am referring to a man in God's word in the book of Job who suffered many afflictions and trials, but who steadfastly held on to his faith in his God. Jeff was brokenhearted and sat on his daddy's knee and asked if mommy was having any pain and whether she had an I.V. As we had always been completely honest with our sons, Jerry answered in the affirmative on both accounts. Tears coursed down Jeff's cheeks as he replied, "Oh Daddy, I wish it could be me instead of mommy 'cause I'm used to these things". That's the kind of love no amount of money could ever buy. I feel blessed to have had a share in it. Nothing on earth can ever take that away from me.

I was discharged home in time for Christmas, but it remains a bit blurred in my mind. It was to be our last Christmas together and I'm very sorry not to be able to remember it better. On my return home from the hospital, there was a beautiful orchid corsage waiting for me. Our church family had remembered me once more in such a lovely way. God bless them. The following day I attended church with my family and played the piano for the Junior Choir to sing their Christmas music.

On Christmas Eve we gave Jeff his first good Bible. He was so proud of it! He read the Christmas story to us and then kept right on reading, chapter after chapter.

In Sunday School one morning, Jeff had arrived late for class. As he entered the room, the other boys clapped their hands. The teacher proceeded to tell Jeff that the boys were drawing pictures of a miracle that had taken place in the Bible. Jeff held his Bible up in the air and announced, "I have my miracle right here!". His Sunday School teacher has told me since that it was an honor to have Jeff in his class and that made me feel very proud.

I have not wished to make Jeff out to be a saint, by any means. He was just a normal little boy and had temper tantrums and became frustrated when things went wrong. He trusted God with all his heart, however, and tried his very best to serve Him the best way he could.