When Jeff was twenty-seven months old, we all welcomed into our home another little son, Jamie Wyatt McMillan. Now Jeff had a little brother to love, and to fight with.

We had moved into a larger home when we discovered another baby was on the way. Life was very busy, very full, very happy. It seemed almost every evening, Jerry and I would thank God that we had each other and our two healthy, happy, little sons. We enjoyed doing all the family fun things - bike rides, hikes, camping, popcorn parties, story time, sing-songs around the piano, and family church activities. We were the type of family that was the happiest when we were all together.

I'm so grateful now that I can look back on many, many happy memories. I feel too many couples become so tied up in material things, they miss the simple joys in life God has given them. They allow their children to become a burden rather than the blessing God intended them to be. We dedicated our babies to God when they were just a few months old. Out of grateful hearts, we thanked God for both of them and gave them back to Him and asked for His divine guidance and direction in each of their lives. 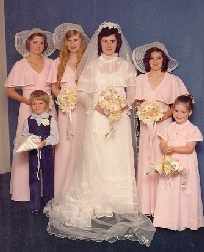 They grew up much too fast! They were close. Jeff could be rough and ready with Jamie, but don't let anyone else try it! He was also very protective of his little brother. Jamie copied everything Jeff did, good and bad. Both our children were quite demonstrative in their affection to us as were we to them. Love was always expressed in our home. We wanted very much for the boys to grow up to be buddies as well as brothers. 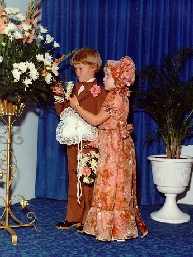 Jeff was asked to be ring bearer in two weddings, one when he was five and another when he was six. He was so proud to be all dressed up and strutted around like a little peacock showing off his clothes to anyone who would take the time to admire him. I must admit, we were very proud of him; he really behaved himself and acted like a little gentleman.

From the time he was old enough to hold a pencil properly, Jeff constantly drew pictures of Jesus on the cross. Every time we would ask him to choose which story he wanted us to read out of his Bible Story Book, he would choose the story of Jesus' crucifixion. I have countless drawings he has done concerning this. It was almost an obsession with him.

It was during the summer of 1970 when I was expecting Jeff, that we met Faye 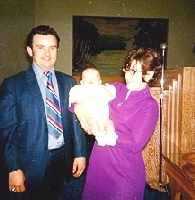 and Terry Ward. They came to Brockville as assistant pastors at our assembly. It was instant friendship. Faye and Terry became very special to us and as our children grew, so did our friendship. They were a second mommy and daddy to our boys, and their little girl, Robin, became 'our girl'. They also kept Jeff for us at the time of Jamie's birth. How we thank God for our many friends, but this precious couple in particular were always there, in our times of sorrow as well as joy. They would anticipate our needs long before we even expressed them. I thank God for their genuine love and concern.

In Kindergarten, Jeff never missed one day of school. He was such a healthy active little boy. In Grade 1 he may have missed one or two days, but it seemed he was almost never sick. When he was in Grade 2, in late fall his teacher mentioned she had noticed he had slowed down somewhat. Jeff had always been an excellent student, and she felt he was acting as if he was tired. We really didn't notice much change in him at home, except perhaps he did seem a little lethargic, but when we'd ask him how he felt, he'd say, "Just fine".